A substitute teacher has been fired after she told an 11-year-old boy that he shouldn’t be thankful for his adoptive dads because homosexuality is a ‘sin’.

The teacher, who has not been named, allegedly went on a homophobic rant in front of a classroom of fifth graders at Deerfield Elementary School in Utah while the students were sharing what they were thankful for ahead of the Thanksgiving holiday.

When it was his turn to speak, a boy named Daniel told the class: ‘I’m thankful that I’m finally going to be adopted by my two dads.‘

‘Why on earth would you be happy about that?’ the substitute replied aggressively, according to fellow students.

‘That’s nothing to be thankful for,’ the substitute apparently told Daniel, who has spent years in foster care and endured two failed adoptions in the past.

Three girls in the class said they tried to stop the teacher multiple times, but she continued with her hurtful remarks.

Daniel’s father Louis van Amstel, a champion ballroom dancer and longtime performer on Dancing With The Stars, posted about the incident on his Facebook page. 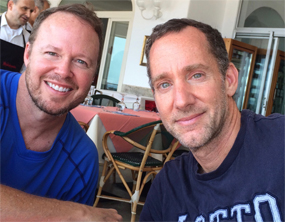 Study: Married gay people are happier than single ones