Rumplepimple is a new book about a dog who runs out of a car and into a grocery store to help a little girl who is being teased by an older boy. In a subtle reference to modern families, Rumplepimple’s caretakers are a same-sex couple.

The book is written by Suzanne DeWitt Hall and illustrated by Kevin Scott Gierman.

Hall says, “The characters in the story are modeled after the real Rumplepimple’s family; he has two moms, and a sister cat named Chicken. There’s nothing strange about that to him – it’s just normal. It’s what he’s always known.

“I think the time has arrived when there is less need for books that explain same sex-parents and more need for books which simply feature characters who happen to have them. That’s the way things get normalized in literature over time. After all, we no longer need a book titled Teacher, Teacher: Why is Sammy’s Skin That Color?”

The Huffington Post chatted with Hall about Rumplepimple and her goals for this book. Check out the interview. 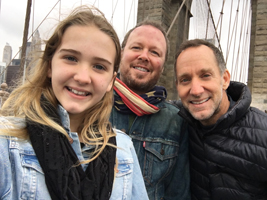