The Appellate Division of the New York Supreme Court affirmed that it is illegal for businesses to discriminate based on sexual orientation. The New York Civil Liberties Union victory came in the case of Melisa and Jennifer McCarthy, who were turned away by the Albany wedding venue they chose after the venue owners found out that they were a same-sex couple.

The McCarthys were thrilled to find what they thought was the wedding venue of their dreams when they discovered Liberty Ridge Farm, a “one-of-a-kind” wedding venue that boasts it is a “picturesque setting for weddings all year round!” But the farm’s owners, Cynthia and Robert Gifford, rejected them, stating they do not allow same-sex couples to get married at their business because they oppose same-sex marriage. But as the New York State Division of Human Rights ruled in 2014, under New York’s Human Rights Law, public businesses cannot discriminate on the basis of race, sexual orientation, national origin or other protected classes.

Together with a national anti-LGBT organization, Liberty Ridge appealed the decision to the Appellate Division, which today vindicated the McCarthys and upheld the Human Rights Division’s decision. In its decision, the court noted that discrimination of the sort faced by the McCarthys hurts all New Yorkers, not just those who were directly harmed: “Discriminatory denial of equal access to goods, services and other advantages made available to the public not only ‘deprives persons of their individual dignity,’ but also ‘denies society the benefits of wide participation in political, economic, and cultural life.’”

“The McCarthys were denied the opportunity to celebrate their marriage at Liberty Ridge, but today we can join them in celebrating the court’s affirmation that all New Yorkers deserve to be treated with dignity and respect,” said NYCLU Executive Director Donna Lieberman.

“New York chose to guarantee a society where lunch counters would serve Black and white customers and businesses would not discriminate on the basis of sexual orientation, and all of us benefit from these protections,” said Mariko Hirose, senior staff attorney at the NYCLU and lead counsel on the case. “We’re glad the court upheld longstanding laws against discrimination, and we’re proud of the McCarthys for standing up for equal treatment of all New Yorkers.”

Though they did not have a wedding at Liberty Ridge, in August of 2013, the McCarthys fulfilled their dream of marrying at a farm in Central Bridge.

via American Civil Liberties Union
Photo not associated with article 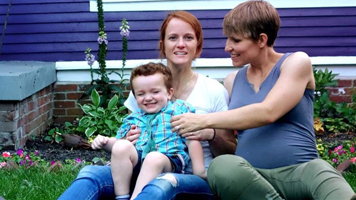