Other than the United States, only a few countries – among them India, Thailand, Ukraine and Mexico – allow paid surrogacy. As a result, there is an increasing flow to the U.S. drawing affluent couples from Europe, Asia and Australia. Indeed, many large surrogacy agencies in the U.S. say international clients – gay, straight, married or single – provide the bulk of their business.

The traffic highlights a divide between the U.S. and much of the world over fundamental questions about what constitutes a family, who is considered a legal parent, who is eligible for citizenship and whether paid childbirth is a service or exploitation.

In many nations, a situation that splits motherhood between the biological mother and a surrogate carrier is widely believed to be against the child’s best interests. And even more so when three women are involved: the genetic mother, whose egg is used; the mother who carries the baby; and the one who commissioned and will raise the child.

Many countries forbid advertising foreign or domestic surrogacy services and allow only what is known as altruistic surrogacy, in which the woman carrying the baby receives payment only for her expenses. Those countries abhor what they call the commercialization of baby making and view commercial surrogacy as inherently exploitive of poor women, noting that affluent women generally do not rent out their wombs.

But while many states, including New York, ban surrogacy, others, like California, welcome it as a legitimate business. Together, domestic and international couples will have more than 2,000 babies through gestational surrogacy in the United States this year, almost three times as many as a decade ago. 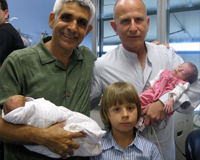