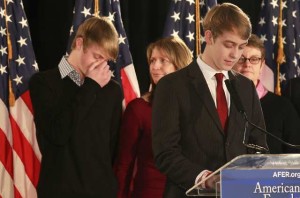 LOS ANGELES, CA – FEBRUARY 7 2012- Elliot Perry, 17, left, wipes a tear as his twin brother Spencer, right, speaks at a Los Angeles press conference at Vibiana’s Tuesday morning February 7 2012 after a federal appeals court struck down California’s ban on same-sex marriage, clearing the way for the U.S. Supreme Court to rule on gay marriage as early as next year. Their parents Kris Perry, right, and Sandy Stier, left, were plaintiffs in the lawsuit.
The 2-1 decision by a panel of the U.S. 9th Circuit Court of Appeals found that Proposition 8, the 2008 ballot measure that limited marriage to one man and one woman, violated the U.S. Constitution. (Brian van der Brug/Los Angeles Times)