St. Lucy’s Priory High School alum Brittany Littleton has collected over 90,000 signatures on her Change.org petition. Now current and former students are planning a sit-in and protest in support of ousted gay teacher Ken Bencomo at today’s school board meeting.

According to friends and fellow teachers, Ken Bencomo had been a “beloved mentor” and teacher at St. Lucy’s Priory High School in Glendora, California for 17 years, heading up the English department and serving as yearbook moderator and dance coach. But shortly after a newspaper story featured Bencomo’s marriage to his long-time partner Christopher Persky, Ken Bencomo was reportedly fired for “violating the church’s teachings.”

Bencomo’s termination prompted St. Lucy’s alum Brittany Littleton to launch a Change.org petition urging St. Lucy’s Priory High School to give Bencomo his job back. More than 90,000 people have joined her campaign, including current and former students. The petition has also been endorsed by actress Sophia Bush and entertainment blogger Perez Hilton on Twitter.

“A few weeks ago, I joined current and former students to deliver 45,000 petition signatures asking St. Lucy’s Priory to reinstate one of its greatest teachers – Mr. Bencomo. Now that our campaign has doubled in size, we’re taking our message directly to the school board,” said Brittany. “Our message is clear: Discrimination is anti-Christian and wrong, and we’re not going anywhere until Mr. B gets his job back.” 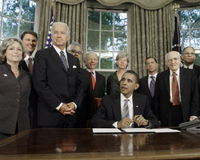 Obama makes explicit his objection to the Defense of Marriage Act