A Miami-Dade Circuit Court judge has decided that a lucky child will have three loving parents (pictured here). Over two years ago, this couple asked their acquaintance to donate his sperm to help them become pregnant. Without any written contract, they became pregnant – and the man decided he wanted to have a role in the parenting. The women disagreed, and a court battle dragged on. Although under Florida law, sperm donors have no legal rights to children.

The two women will have sole parental rights, although he will be allowed to visit the child. He will not be expected to provide child support.

“We’re trying to do the right thing for Emma,” one of the moms said. “We want Emma to have it all, and we believe by doing it this way, including him in a birthday or Thanksgiving, it’ll be a nice addition for her.”

“We believe the best interest for Emma is for him to have a role in her life, but not as a parent,” she said. “The role is this is mommy’s good friend who helped your moms have you because they wanted you so badly.” 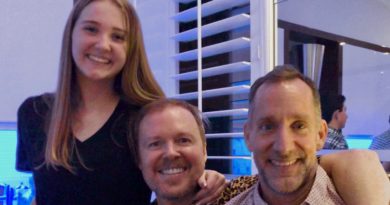 Our family’s response to the coronavirus

The 2010 U.S. Census allows us to use one of two terms to describe our household partners. How do you refer to your partner?