Protests are taking place in Australia because of proposed laws preventing gay couples, singles, and new de factos from having children through altruistic surrogacy. Two Brisbane dads are protesting the proposed laws. The guys are thankful for their twins they fathered with the help of a friend-of-a-friend who acted as surrogate.

Michael and Jared (NOT pictured) would be unable to create their loving family. They’d go to jail for having children through surrogacy under laws proposed by the Liberal National Party (LNP) government. The government’s proposed laws wouldn’t affect them because they’ve finished their family.

Michael says, “We can’t imagine our life without the boys. They’ve brought so much to our lives. It’s not an easy thing to do for a non-male-female couple to go about having children. They have to be wanted and planned for. It’s not something that’s ever done on a whim.” 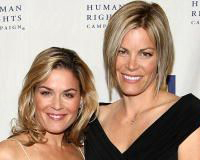