Two months ago, Neil Patrick Harris and David Burtka became parents to fraternal twins. Since then, the babies have been keeping them busy. And according to Neil and David, it’s all just as they hoped for.

The family just moved into a “more kid-friendly” home in the Hollywood Hills, where the twins have a brand new nursery with an old-school Disney theme park décor.

NPH admits that he’s still trying “wrap” his mind around being a dad to his little ones, Harper Grace and Gideon Scott, but that the experience has been so amazing thus far. David reveals that Harper is the “fussy” baby while Gideon has been the “easiest baby in the world,” so far.

In an interview with PEOPLE David reveals his utter joy that they’ve started to “recognize” him and Neil and have even started smiling. Neil added: “I just love the way they smell. And we can use them as an excuse to get out of almost anything. That’s cleared the calendar in a good way.” 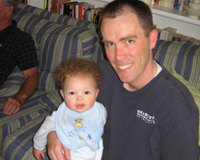