Iowa ended a four-year decline in the number of couples getting married last year – and experts say the turnaround could have been aided in part by an April 2009 court ruling that legalized marriage equality.

Susan Stewart, associate professor of sociology at Iowa State University, said marriage rates nationally “have never been lower” so there’s a good chance the new phenomenon of same-sex marriages weighs into Iowa’s increase. “It would seem like a big coincidence if the same-sex couples getting married weren’t part of this,” she said.

Preliminary vital records compiled by state officials indicate 21,139 marriages occurred in Iowa last year – the most since 2000 and the first increase since 2005. The 1,573 jump in marriages over 2008 included the first-ever same-gender unions that took place statewide after the Iowa Supreme Court overturned a state law that defined marriage as only between one man and one woman.

Same-sex couples from neighboring states make up 60 percent of gay marriages in Iowa. The statistic is a result of data compiled since April 2009 – when marriage equality became legal in the Tall Corn State.

The new report from the Iowa Department of Public Health says 2,020 same-sex marriages were recorded in Iowa from April 27, 2009, through March 31. Only 815 of the couples were from Iowa. The newly married included 199 gay couples from Illinois, 158 from Missouri and 111 from Nebraska. More than 160 faith leaders in Iowa have joined together – to support marriage equality. The group is concerned about people and groups who cite the Bible to support their bigotry.

The Interfaith Alliance of Iowa held a Statehouse news conference to say that 167 representatives from a cross-section of diverse faiths in the state had sent a letter to all 150 legislators outlining their position.

“As many faith traditions affirm, where there is love, the sacred is in our midst,” the letter states. “This belief is the same for couples comprised of a man and a woman, two women or two men.”

At least 360 same-sex couples have applied for marriage licenses in Iowa, with the heaviest concentrations in Polk [Des Moines], Johnson [Iowa City], Linn [Cedar Rapids], and Scott [Davenport] counties, according to information collected by The Des Moines Register. The tally so far includes 26 out-of-state couples, according to a survey of county recorders. The Register is still gathering its data, but the greatest number of applications so far is in Polk County, which has logged 83. Johnson County has seen 40 applications so far, Linn County has 40, and Scott County has seen at least 18. Today was the first day same-sex couples could marry since the April 3 Iowa Supreme Court opinion that struck down a state law that said marriage was only between a man and a woman.

4/6/2009
Obama’s reaction to marriage equality in Iowa
The White House sent out a statement following the Iowa ruling:

“The President respects the decision of the Iowa Supreme Court, and continues to believe that states should make their own decisions when it comes to the issue of marriage. Although President Obama supports civil unions rather than same-sex marriage, he believes that committed gay and lesbian couples should receive equal rights under the law.”

“The Iowa Supreme Court this morning struck down a 1998 state law that limits marriage to one man and one woman. The ruling is viewed as a victory for the gay rights movement in Iowa and elsewhere, and a setback for social conservatives who wanted to protect traditional families. The decision makes Iowa the first Midwestern state, and the fourth nationwide, to allow same-sex marriages.

Lawyers for Lambda Legal financed the court battle and represented the couples. The group had hoped to use a court victory to demonstrate acceptance of same-sex marriage in heartland America.

Richard Socarides, a former senior adviser to President Bill Clinton on gay civil rights, said today’s decision could set the stage for other states. Socarides was was a senior political assistant for Iowa Sen. Tom Harkin in the early 1990s. ‘I think it’s significant because Iowa is considered a Midwest sate in the mainstream of American thought,’ Socarides said. ‘Unlike states on the coasts, there’s nothing more American than Iowa. As they say during the presidential caucuses, ‘As Iowa goes, so goes the nation.’'”

Can employers discriminate against a person on the basis of their sexual orientation? 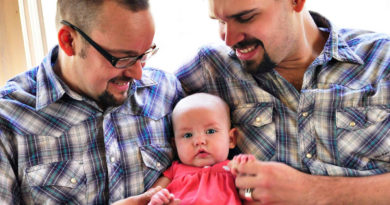