Last month, advocates and opponents of same-sex marriage packed the New Jersey State House in Trenton, supporters in blue, opponents in red. Near the end of the day, Kasey Nicholson-McFadden [pictured with his moms] took the microphone. “It doesn’t bother me to tell kids my parents are gay,” he said in a clear voice. “It does bother me to say they aren’t married. It makes me feel that our family is less than their family.”

Kasey is 10 years old. When the New Jersey State Senate voted against same-sex marriage on Jan. 7, he was devastated. “We tried to buoy him and say, ‘It’s another step in the process and it’s not over yet,’ ” said Karen Nicholson-McFadden, one of Kasey’s mothers.

In fact, Garden State Equality, the New Jersey gay-rights organization that invited Kasey to speak, quickly told reporters they would pursue the issue through the judiciary system. It will be familiar territory for the Nicholson-McFaddens, who vow to press on — be it through rallies or lawsuits. “I’ve long believed in and have always spoken out for the rights of same-sex couples,” the musician wrote on his website.

“Like many of you who live in New Jersey, I’ve been following the progress of the marriage-equality legislation currently being considered in Trenton. I’ve long believed in and have always spoken out for the rights of same sex couples and fully agree with Governor Corzine when he writes that, “The marriage-equality issue should be recognized for what it truly is — a civil rights issue that must be approved to assure that every citizen is treated equally under the law.” I couldn’t agree more with that statement and urge those who support equal treatment for our gay and lesbian brothers and sisters to let their voices be heard now.” New Jersey citizens are becoming more active as the debate over gay unions in the state goes “from the philosophical to the practical, and from the courts to the Legislature”.

From the AP: Both sides – those who say they want to “protect marriage” as it is, and those who call for “marriage equality” – are recruiting and mobilizing volunteers to pressure lawmakers.

A bill that would allow gay marriage is expected to be debated in Trenton during the lame-duck period between the Nov. 3 election and start of a new legislative session in January. In the fall, there probably will be television and radio ads on the issue. But for now, the focus is mostly on the faithful speaking to their representatives in Trenton.

In 2006, the state Supreme Court said committed gay couples deserved the same treatment as straight married couples. The Legislature responded by making New Jersey the third state to offer civil unions, which give the same legal benefits the state offers to married couples, but not the title of marriage.

That didn’t settle the issue.

As couples first entered into civil unions in February 2007, Garden State Equality chairman Steven Goldstein vowed that within two years, his group would persuade lawmakers and the governor to do what no other state had done — pass a law recognizing same-sex marriage. 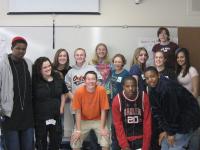