Parker and her partner, Kathy Hubbard, have been together since 1990. They have two adopted children.

“This election has changed the world for the gay, lesbian, bisexual and transgendered community. Just as it is about transforming the lives of all Houstonians for the better, and that’s what my administration will be about,” Parker told supporters after former city attorney Gene Locke conceded defeat.

Both are Democrats who faced off for the second time because neither emerged with more than 50 percent of the vote in the November 3 election.

Other cities such as Providence, Rhode Island, and Portland, Oregon, have picked openly gay mayors. Houston is the fourth-largest U.S. city.

Parker will take office in January, replacing Bill White who could not run because of term limits. Chron.com does a great job profiling a delightful family in Sugar Land – a suburb of Houston.

Austin and Bill [fathers of Ava, 7, and Elijah, 6] met at an Oakland [CA] health club in 2002. Austin tells Chron that “the two fell into domestication almost immediately and in April 2004 made it official with a domestic partnership”.

The couple adopted the children from state authorities while living in Oakland, Calif., after taking required parent-training classes and fostering each of the children for more than a year. Ava was almost 4 when she entered the system, and Elijah was just a month old.

Two years ago, the family moved to the Houston area to be closer to Austin’s parents and to give their kids a better education. Austin works full time as a financial analyst, and Thomasson, who worked in mortgages for more than 20 years in California, works part time and shuttles the kids around. Although they might have stood out less in California – “Being gay in California is the biggest nonissue,” said Austin, “almost like being Republican” – they’re finding their neighborhood in affluent, conservative Sugar Land has been accepting.

Immigration laws discriminate against lesbian and gay couples. Lesbian mom to be deported to back to the Philippines. 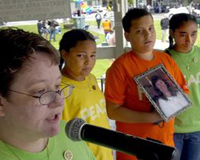