Barrios, 40, will be GLAAD’s youngest-ever president. He’s Cuban-American and bilingual. He’s been with partner Doug Hattaway for 16 years, and they’ve got two teenage sons.

“Jarrett is an inspiring, new voice for the national movement,” said Yvette Burton, Co-Chair of GLAAD’s Board of Directors. “As a Latino and a parent, he will build bridges among communities. He is also an accomplished progressive leader and activist with the talent and experience to take GLAAD and our movement to new heights.”

Barrios has been an advocate for equality since co-chairing Harvard’s GLBT student organization in the late 1980s and the Boston Gay and Lesbian Anti-Violence Project in the early 1990s. He has also served on the boards of the Servicemembers Legal Defense Network, Gay and Lesbian Advocates and Defenders and Greater Boston Lesbian and Gay Political Alliance.

As a State Senator, Barrios successfully helped lead the legislative effort to protect marriage equality in Massachusetts, and is best known for a globally televised speech where he spoke on discrimination faced by his own family. In the legislature, he also successfully championed anti-bullying legislation, the Gay and Lesbian Youth Commission to prevent teen suicide and make schools safe for LGBT youth, buffer zones for women’s health facilities and other progressive issues. 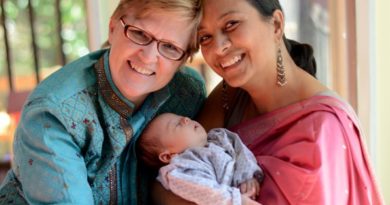