Marie Osmond wants us to know that she loves and supports her lesbian daughter Jessica – although it contradicts with her Mormon belief system.

Osmond was interviewed by Entertainment Tonight to talk about their relationship and how love before prejudice is a better way of life.

Marie says: “I love my daughter, she’s my baby girl, come on. She’s an amazing woman. I raised her, she better be good. There are a lot of women out there who have gay kids, who cares?”

Pop legend Marie Osmond [pictured] has spoken out in support of her daughter after a tabloid magazine reported that she is a lesbian.

In an interview with Los Angeles radio station KOST 103.5, Marie Osmond confirmed that her oldest daughter Jessica is a lesbian — calling her a “magnificent woman” and stating that she supports her daughter and believes in equal rights for gays and lesbians under the law.

Osmond’s public support of her daughter is significant to the cause of gay marriage, because Osmond is the highest profile Mormon thus far to come out in support of marriage equality — or at least giving gay and lesbian couples the same rights afforded to heterosexual couples. 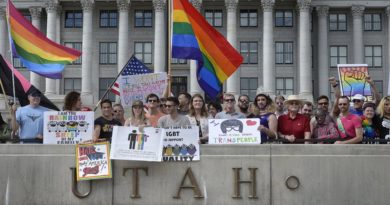