Neiley, a 17-year-old student at Champlain Valley Union High School, told committee members of his own difficulty coming out as a gay teenager and how the lack of marriage rights played into his own fears that he was less of a person than his straight counterparts.

He said he was teased and ridiculed by classmates for being gay – discrimination that he said is fueled by the fact that gays and lesbians have less legal rights than heterosexuals.

In his testimony James says, “On my own behalf, I know that if I were to have a child, I would do my best to make him or her a positive influence on society. I would pack them a lunch and always put a cookie or brownie in to brighten their day. I would drop them off at soccer, or choir, or dance, or anything that they wanted to do. I would sing them to sleep, I would push them on the swings, and when they were little I would let them win races by no more than a centimeter. I would raise them the exact same way my amazing parents raised me. I would raise them to be no one but themselves and I would raise them to respect the same in others. 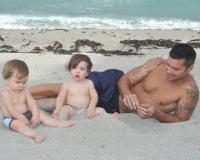