When the Supreme Judicial Court handed down its landmark decision five years ago tomorrow allowing same-sex couples to wed in Massachusetts, opponents warned that traditional marriage would be endangered, while supporters envisioned an equality movement that would spread across the nation.

Over 11,000 same-sex marriages later, neither has happened.

Massachusetts has yet to become, as former governor Mitt Romney predicted, the “Las Vegas of same-sex marriage.” Gay marriage rates leveled off at about 1,500 a year – about 4 percent of all state marriages – in 2006 and 2007. The divorce rate in Massachusetts has remained the same – and the lowest in the country.

What’s really changed is more subtle than cosmic, more about the everyday lives of gay couples in Massachusetts than about a national transformation. Gay and lesbian couples here said they are attracting fewer startled looks when they rent cars, less consternation when they hold hands, fewer awkward questions when they visit spouses in hospital rooms.

“When we’re out together as a couple, it really doesn’t come up; we’re never challenged anymore,” said David Wilson, one of the plaintiffs in the 2003 SJC case and the current chairman of MassEquality, a gay-rights advocacy group. “It’s now considered normal.” 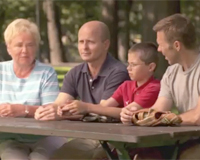 I couldn’t see my dying partner: A Miami hospital reacts slowly to recognizing lesbians as a couple during traumatic ordeal