“Our journey to parenthood was not easy, cheap or fun. The result, however, has been the most amazing experience in the world; being called Daddy and Dad by our loving daughter,” so says Tommy Starling and Jeff Littlefield – of South Carolina.

TheState.com profiles the Starling-Littlefield family along with some hopeful news about the growing number of surrogates helping gay men realize their dream of fatherhood.

Starling said he and Littlefield had tried previously to adopt a child in South Carolina but encountered anti-gay hostility and instead opted to become parents through a surrogacy program run by Los Angeles-based Growing Generations.

Since 1996, it has matched hundreds of gay men with surrogate mothers who are paid to carry an implanted embryo produced from a donor egg fertilized with the client’s sperm. 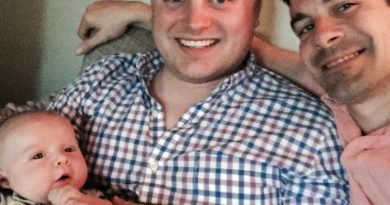