A lesbian couple in Galveston, Texas whose eight-year relationship ended is in a legal battle over whether the woman who adopted the child born to her partner should be recognized as the girl’s parent. Because there is no law in Texas on second parent adoptions, the adoption is vulnerable.

The daughter’s biological mother, Julie Anne Hobbs, claims the 2001 adoption by her former partner, Janet Kathleen Van Stavern, is void. She says among the requirements for a child to be adopted under the Texas Family Code is for the child’s relationship with biological parents to be terminated or for the parent whose rights were not terminated to be married to the person seeking custody. Same-sex marriages are not recognized in Texas.

The Texas Supreme Court could put an end to the battle.

If this court decides that a second parent adoption by a gay or lesbian parent is void, that is going to send a very chilling message to all those parents out there who are reliant on that relationship being kept stable.

The adoption of the girl, now 9, by Van Stavern has been upheld by three judges, but attorneys for biological mother Hobbs continue to claim Van Stavern’s adoption was void from the time it was approved. 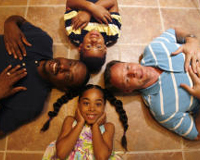