Dellacqua – who has two children with Amanda Judd – has received more than 2,000 retweets of her post: “Margaret. Enough is Enough.” Dellacqua’s post was a response to Court’s published letter which said, “If we continue to dismantle the traditional family unit as old fashioned, arctic and no longer even necessary or relevant, we will create a fatherless generation.”

Australian Olympian John Millman also opposes Court. “I’m all for any type of relationships. The more people get along the better and so it’s a little bit disappointing. I just think in this day and age, there’s so much worse things happening in the world. It’s not a bad thing. I think it’s a great thing when two people, regardless of their gender, find love and whatever.”

In 1970, Court became the first woman during the open era (and the second woman in history) to win the singles Grand Slam (all four major tournaments in the same calendar year).

Having grown up as a Roman Catholic, Court became associated with Pentecostalism in the 1970s and became a Pentecostal Christian minister in 1991. She later founded the Margaret Court Ministries.

Court has been criticized by openly lesbian tennis players Billie Jean King, Rennae Stubbs and Martina Navratilova. An LGBT rights protest group urged spectators to display rainbow flags at the Margaret Court Arena during the 2012 Australian Open and called for the renaming of the venue. Court has also been criticized by the Australian Press Council (APC) for propagating false and “potentially dangerous” information about homosexuality in an article she had published in the Herald Sun tabloid.

via The Guardian
photo: Casey Dellacqua/Instagram 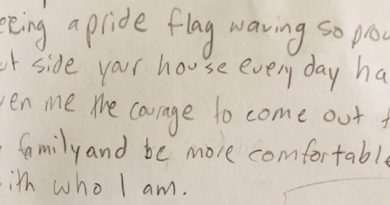 Australian teacher apologizes for removing the word ‘gay’ from song